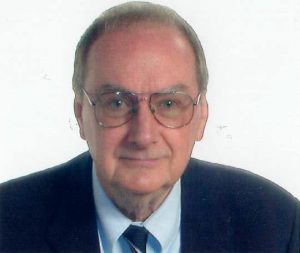 Walter Deitrich passed away on Saturday August 1st in Naperville, Illinois. His obituary follows. In addition to being a strong Christian man, he was a big supporter of VCC and the AFCU where he co-chaired the development committee and served on the executive committee. We all miss his presence and strong leadership. I shall personally miss him greatly. He was always a wise and valuable counsel. Here is a memorial paragraph written by fellow AFCU Board member, Rev. Dr. Jim Wiberg, also a former pastor at the VCC during 1999-2005:

Lawrence Walter “Walt” Deitrich, age 81, peacefully passed away on Saturday, August 1, 2020 at Edward Hospital of Naperville. He was born on October 17, 1938 in Pittsburgh, PA, to loving parents Leon Lawrence and Margaret Deitrich. Cherished husband of 55 years to

Walt Deitrich was a 50-year veteran of the nuclear power industry. Most of his career was spent at Argonne National Laboratory, working in reactor technology and reactor safety research, including 5 years as Division Director of Reactor Engineering. He also worked at the Knolls Atomic Power Laboratory in Schenectady, NY, and for 3 years (2003-2006) at the International Atomic Energy Agency in Vienna, Austria. He continued to assist the IAEA with numerous training courses through 2019.

Walt loved his family, friends, and Saviour Jesus Christ. He was an enthusiastic assisting minister at Our Saviour’s Lutheran Church. He was also an avid world-wide traveller, especially savoring trips to Japan with his son, Dave, and visits to places and colleagues around the world.