The American & Foreign Christian Union board in October 2018
This past week, pastors and delegates of the American churches in Berlin, Paris, and Vienna flew to the United States for the annual meeting of The American & Foreign Christian Union held for the first time in Ridgefield, Connecticut. European representatives assembled with U.S. board members who traveled from twelve states to do the work of the ecumenical and global American churches in Europe.
From October 11th through the14th, 41 lay leaders and ministers from around the world put their shoulders to the wheel to support and offer encouragement to these exceptional faith communities. The First Congregational Church Ridgefield hosted the meetings, and generous volunteers offered hospitality to their international guests in the newly renovated “church by the fountain,” that was gathered as a congregation in 1712. Ridgefield congregants and volunteers observed how the AFCU and its member congregations possess hard-won wisdom to share in a pluralistic society too often marked by fear, hostility, and a climate of alienation. Delegates attested to the ways that these international congregations are able to bear witness to God’s love for the entire world, because the entire world worships in these churches, and participants ultimately take what they have lived and learned back to every continent.
Imagine worshipping with members from more than fifty countries and twice as many denominations, and then sharing a cup of coffee following services with Sri Lankan evangelicals,
Swedish Lutherans, Filipino Catholics, Hong Kong Presbyterians, Brazilian Pentecostals,
Ghanaian Anglicans, Greek Orthodox, Nigerian Methodists, and so many more who all call the
same church “home.” 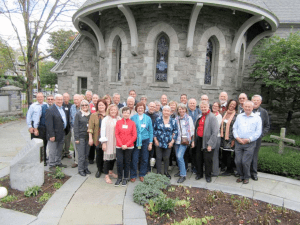 These vibrant and diverse European partner churches demonstrate what it means to live their
faith in unified and reconciled ways. At a time when many increasingly secular European
countries are often said to be post-Christian, strengthening these international and
interdenominational faith connections makes a real difference. These spirited houses of prayer
for all people serve as beacons of hope for a world that is troubled by rapid globalization and
mass migrations.
Eruptions of gun violence, terrorist actions, and political tensions among nations have resulted in
distrust of “otherness.” This new wariness is experienced more acutely as events such as the
Paris Bataclan terrorist attacks in 2015 have sharply threatened already eroding assumptions of
safety. AFCU member church budgets must now include provisions for security that were
previously unnecessary.
All Abrahamic faiths – Judaism, Christianity, and Islam – call believers to hospitality rather than
suspicion. All three faiths share sacred texts that unequivocally require followers to welcome and
care for the stranger. AFCU member churches live this scriptural vision, as they honor the often
divergent beliefs in their midst. These practices of hospitality are expressions of God’s love for
all people, and are understood as essential elements of Christian discipleship.
Visitors to these unique churches are always astonished to discover joyous worshipping
communities with congregants whose faces more greatly resemble the General Assembly of the
United Nations than any church they have ever attended. Discovering how best to honor the
particularity of each member’s specific denominational and doctrinal histories, beliefs, and hopes
is challenging. Balancing diverse points of view without allowing any of them to over-ride the
particular claims of others is even more complex, rendering these communities living
laboratories of peacemaking, mercy, and justice. Members of these churches almost always
arrive with preconceived points of view, and then gradually learn to embody the humility to
disagree agreeably, ultimately affirming that what unites is far more precious than whatever
divides.
On Sunday, October 14th, AFCU board president Theodore Ziemann addressed The First
Congregational Church Ridgefield, expressing gratitude for their warm Connecticut welcome
and bringing them greetings from the European churches. The Ridgefield congregation gained a
deeper appreciation of their greater connection to the church universal and extended church
family.
The hospitality and reconciliation practiced in the global churches of Berlin, Paris, and
Vienna demonstrate how diverse fellowships can be harmonious, and serve as unifying
exemplars in a world where religion is so often maligned as the cause of power struggles and
violence. These unique communities of faith offer uncommon expressions of diplomacy and
international understanding for our time, which is very good news indeed.
The Reverend Karen Anne Halac is associate minister at The First Congregational Church Ridgefield, 103 Main Street
She can be reached at 203-438-8077 or karenh@firstcongregational.com.